Having a hard time sticking to Mr. Loomis' method/Side planes of the head

This topic contains 14 replies, has 4 voices, and was last updated by

Thanks a lot CCC, you truly answered the most important questions, that led me to create this thread.

You are probably right, that I should temporarily switch back to pencil for a deeper dive. Unfortunately, at the moment it seems like all my graphite pencils have been swallowed up by the creative chaos around my workplace. It's probably time to put tidying up my workplace on the schedule. :(

You mentioned how on my 1 minute drawings the Loomis construction is barely visible. I noticed that too, but chalked it off as somehow a natural development: When I draw actual brows, the browline will mostly disappear, when I draw nose and chin, the markers for their placement will be usurped by the lines, the only lines that stay visible in my experience are the excess parts, that don't indicate facial features, like the lower front quarter of the original sphere, and the rim of the side planes.

When I mentioned the lack of individual informations on a Loomis head, that was mostly a reaction to the proposal to quick-sketch them. After 30 secs there just isn't enough visible on a paper to actually critique myself, just the beginnings of a very generic geometric pattern that gives little clues as to whether its proportions or alignments are where they need to be or slightly off.

I still think spotting such inaccuracies without filling in the features first is hard, but your post just inspired me to give it another try.

Here is an example of why I find assessing the barebones Loomis construct hard:

The head obviously has 2 right ears. The outer one is where I expected it to be, merely from following the construct method, only after I indicated the right eye and the outline of the shadows along her right cheek did I realize, that the distance from her cheek to her ear was way too big, and indeed the cut-off of the side of the head on that side should have been way closer to the centre, making the right side of her head too wide.

Your main issue seems to be that the perspective of the drawing isn't particularly consistent across the head, which is probably because you simply aren't indicating enough of the structure of the head to keep the perspective consistent inside your mind, and aren't taking enough care to lay the lines out properly.

If I indicate some of the Loomis construction lines you put down on your drawing, it's clear that things aren't adding up properly. The brow, nose, and chin lines seem to be parallel, but aren't properly perpendicular to the center line (which also seems to be a bit too far to the right). The vertical line of the side plane didn't seem to be indicated in your drawing, but if we assume it's parallel to the center line (which it should be), it doesn't seem to match up with the side plane that was indicated (although I wasn't very sure as to where the side plane was meant to be).

If we use the inferred vertical line of the side plane (not looking at the center line), it matches up with the plane, but of course isn't parallel to the center line.

The inner ear seems to line up fairly well with the side plane, although it's too high (top of the ear should be under the brow line). However, if you thought the outer ear was correct during construction, you're either having issues placing the ear on the side plane, or I didn't read the side plane correctly (and therefore the perspective of the side plane is even further off from that of the front plane of the face). I wouldn't worry too much about ear placement on the basic Loomis head, though, since the side plane on an actual head isn't perfectly flat and also bulges out slightly.

When practicing, I would try to indicate the center line of the head and the nose line across the entire head, rather than just across the face, such as Loomis does in some of his drawings: 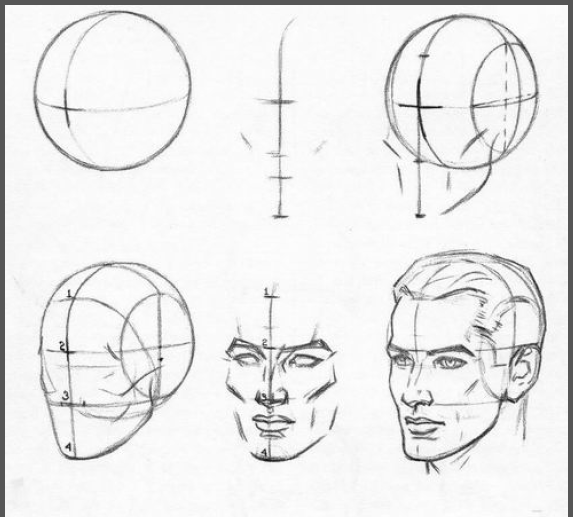 I feel like drawing these lines (as well as further lines around the head in other locations) helps me understand the structure of the head a bit better.

However, if you're using the placement of the features as an excuse to not properly indicate the structural lines, I'd advise against doing so. Unlike the brow/nose/chin lines, the actual features aren't perfectly aligned with each other, so you'll need to keep the brow line around to better offset the brow ridge a bit forward, or the chin a bit back, etc.

Login or create an account to participate on the forums.